- June 18, 2012
Hey gals! Sarah here, your favorite basilmentos star! Today my mom and I went on a hike. I didnt really like it very much because I spent a majority of the time bundled up in a wad of jackets underneath Anna's arm. It would have been fine on a chilly day, but man, I was sweltering! Anna was complaing about the heat and I was like "Come on, lady! Your not the one suffocating in a pile of jackets!"  I asked her to take me out, but she said people might think she is weird for carrying a doll around just because she is a teenager. But seriously, who wouldnt want to be seen with me!?

Anyways, we hiked up a trail a little ways until we got to a bunch of smaller dirt paths bursting over with vegitation. There were misquitoes EVERYWHERE, and if you stopped moving for more than 5 seconds, you became their afternoon snack. Strangley enough, Anna didnt seem to mind, and she set me up for a little filming. I like filming. Whenever Anna takes out the camera I get excited, because I know I am going to be in the spotlight for a while.

The only issue is that we were filming in a public place, and when people walked by- it was super awkward. You can only imagine the confused stares we got from hikers along the trail. Sometimes people would ask what we are doing, which is actually kind of good, because then Anna could explain and the hikers would move on. Eventually we worked our way up to an overlook- a big mistake. There were beautiful panoramic views all around, mountains, the glittering sea, and LOTS of traffic. We had to climb a steep side trail to get up to the overlook, so we figured that there would be no issue with other hikers strolling through. We were wrong. Every few minutes we would hear voices and a new group of people would emerge from the bushes. Most of them seemed confused by the filming, and some asked questions. Anna went along taking pictures and I modeled perfectly- as usual. Thankfully, we finished that scene pretty quickly, and we could escape the awkwardness of being watched while filming a video. I was tired, and it was late, so we trundled back down the hill (at this point Anna had given up on hiding me in a bundle of jackets) and drove home.

I have to go filming tommarow too. Man, it has been a long week. We probably wont have any videos posted this week, but there are plenty coming soon. Until then, here is a picture from today's hike for you all to enjoy. 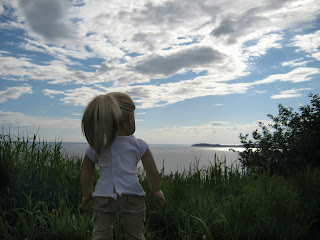 Hope you are all having a great summer!
--- Sarah