My opinion on Caroline Abott

I have been really upset with American Girl latley. Their prices have skyrocketed and the quality of their products is plummeting. This makes me angry, but I am particularly frustrated about the newest release - Caroline Abbott, a historical doll from the 1800's. Caroline has long, curly blond hair and greenish-bluish eyes. She is a pretty doll, but there is something about her that really haunts me. I know that many of you will disagree, but I feel the need to state my opinion.
She looks like a barbie.
I know, I know, most of you are probably upset. When American Girl released the photos of Caroline, there was a mostly positive response. The majority of people like her, including me. I actually think she is quite pretty.
Still, I would like you to see past that and think about Mattel's values. Below, I have a picture of Caroline Abbott in comparison to a Barbie. Seeing these two photos together really shocked me. Their hair - the same. Their eyes- the same. Their dress- well, similar. 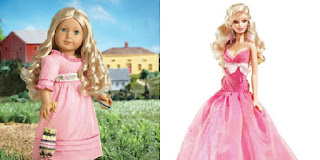 I showed my mom this picture and she was very surprised as well. Her suspicion is that somebody who worked in the design department for barbie was moved over to the American Girl design department. I would not be surprised. In fact, it is not just the dolls that are similar.
Below, I have a photograph that shows the comparison between Caroline Abbott's parlor set and a fold out barbie house. While they may seem different, the underlying design strategies are the same. Of course, the American Girl one is much more detailed (and a lot cuter). I really like the set, and if it is around 100$ I may consider buying it. 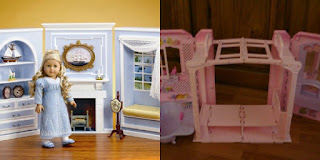 The one thing that peeved me the most about Caroline Abbott's collection is the "sailboat", a crummy looking peice of plastic that is only a few centimeters bigger than the doll. It is just large enough that she can sit in it, and there is still a little room left for the goofy sail. I almost burst out laughing when I saw the picture of the boat- it is kind of hilarious! It seems unsafe to put in water, considering the likleyhood that the doll could fall in. It just looks too goofy, and I doubt that it will sell well. On the other hand, for younger girls, this could be a delightful toy. I had lots of toy boats when I was a little kid, from companies like barbie and playmobil. However, I think this is a miss for american girl. It just does not fit their companies standard. 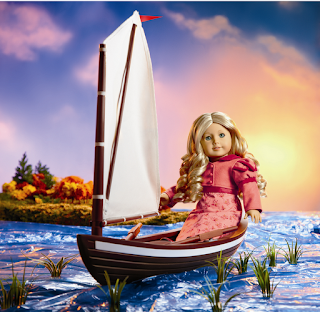 Overall, I think Caroline Abbott is a very pretty doll. However, I am very frustrated with Mattel for lowering their quality so much, and am also upset by the fact that American Girl dolls are starting to more like barbies. I really feel like the company is going downhill.