- October 06, 2012
Hey Doll lovers!
My mom recently found some old AmericanGirl catolouges on Ebay, and she bought a few for me. While I enjoy reading modern AG catolouges, (the most recent one featured carolines whole collection) The old ones are even more entertaining. I love looking at the products AmericanGirl made back in the early 2000's and comparing them to the ones they make today. I must say, I like the old products even better than some of the new ones!
The prices also interest me. In the 2001 spring catolouge, there was a tent and camping chair set for sale, and guess how much it cost? $34! For a doll tent AND a foldable camping chair! I understand that due to inflation the prices must go up to some extent, but looking at the newer stuff makes me crazy - the modern AG doll tent costs $75 by itself! The old stuff is pretty cute, so I looked some of it up on Ebay. This is where it gets even more shocking.
It turns out, the older the product is, the more it sells for on Ebay. There were a few Mia girl of the year dolls (from 2008 I believe) listed for sale at $200-$300! Nicki GOTY (2007) dolls are selling for even more, sometimes up to $500. However, the newer dolls, such as Kanani (2011) are selling within the range of $100-$200. According to this data, the dolls actually go up in value as they get older, as long as they are in good condition. This makes me wonder what my felicity doll is worth. (not that I would ever sell her, DONT WORRY!) She is not in great condition, but she is from 2001. I might do some more research on that, just out of curiosity.
For me, looking at all the old AmericanGirl stuff on Ebay has stirred up some desire. I find many of the old outfits quite charming. The historical dresses are all so pretty and I love the old Just Like You doll outfits and accesories. I have found many cute outfits from the days when AmericanGirl was still called Pleasant company, and they are definetly on my wishlist!
If you are ever looking for something fun and doll related, I definetly reccomend buying an old AmericanGirl catolouge on Ebay. Looking through mine has brought me hours of fun and interest, and I have discovered so many cute doll things!


Fun Fact: In modern AmericanGirl catolouges, the photos are taken in a proffesional photography studio with lighting, green screens, fake foliage ect. Back in the early 2000's, AmericanGirl used to actually take the dolls outside, set them up on the pavement or grass and take photos. Here is a sample photo of Lindsey (girl of the year 2001) so that you can see what I mean. Notice the sunshine on her face? That photo was obviously taken outside on a normal sunny day! 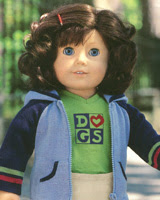 Below I have included a photo of Kanani (girl of the year 2011) "outside" on the beach. You can clearly see that the water is actually made of cellophane, and the lighting is extremley controlled, so that the image is almost cartoonish. 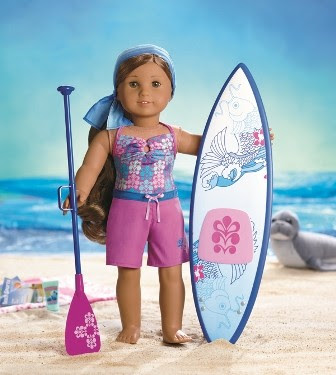 AmericanGirl has changed so much over the past decade. I find it fascinating. What do you guys think?